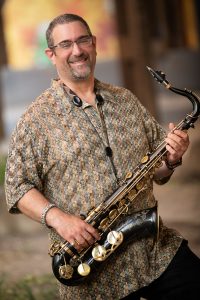 Steve Schnall has also served as an Associate Member of NACA (with his own booking agency SSB Intl Band Booking), the National Association of Campus Activities, as well as a member AFM/CFM-Steve Schnall is also a voting member of NARAS. Steve has a Masters Degree in Jazz Studies from the renowned Depaul University, and has completed his doctorate in musical arts (ABD) from the University of Illinois on full scholarship. He also has a music substitute teaching license in Illinois, and is in the process of obtaining his Professional Educators License for music in Illinois. He currently resides in the Chicago suburb of Plainfield with his two sons, Gavin and Garrett. 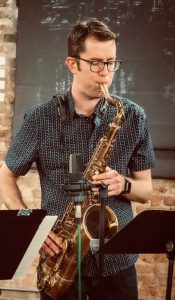 Andy Schlinder is a Chicago-based saxophonist/multi-instrumentalist. After taking up saxophone at an early age, he’s been fortunate to perform regularly for a living. After getting his bachelors in Music at Chicago College of the Performing Arts, he toured with The Glenn Miller Orchestra and The Tommy Dorsey Orchestra. He has been fortunate to play with great musicians like Ralph Bowen, John Swana, Lew Soloff, Denis DiBlasio, Eric Marienthal, Jeff Coffin, The Buddy RIch Big Band, Frankie Avalon, Mike Smith, Wycliff Gorden, Wes “Warmdaddy” Anderson, Marcus Printup and Grace Kelly to name a few. Starting in 2009, he apprenticed and became a saxophone technician as well. He currently runs his own company called AP Saxophone Repair, specializing in high-end saxophone repair and maintenance. Andy regularly plays with Bill O’Connell and the Chicago Skyliners, The Heritage Jazz Orchestra, New Nostalgia, The Flat Cats and various other working bands in the area. He feels very fortunate to be playing tenor sax in Saxofonix with such talented players! 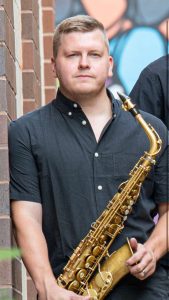 Chris Werve maintains a busy schedule as a band director, jazz educator, clinician, judge, and professional saxophonist. As a performer, Chris has considerable experience in big band jazz, combo jazz, funk, saxophone quartet, and popular music. He is a member of the Vern Spevak Big Band, Pete Ellman Big Band, Paul Windsor Orchestra, the Chris Werve Jazztet, and newly formed saxophone quartet, Saxofonix. He has performed with some of the top jazz ensembles in Chicago and was a featured performer and clinician in the 2016 and 2021 Naperville Big Band Jazz Festivals. As a member of the Vern Spevak Big Band, he was a featured soloist at the opening concert of the 2016 Illinois Music Educators Conference (IMEC) and will be featured on the upcoming Vern Spevak and Pete Ellman Big Band albums to be released in 2021.

Jacob Slocum is an Artist who approaches his medium of music through the Lens of Jazz. Although Firmly rooted in an ethos of Soulfulness (the Blues, the music of the Black Church, and the tradition of Jazz); Jacob lives by Charlie Parker’s words that there is no boundary line to art. Jacob is an artist easily at home in a variety of settings and genres secular or sacred instrumental or choral.

Jacob has released multiple projects under his own name featuring his two main bands Rose Window and Amen Corner. He has performed with Ernest Dawkins, Fareed Haque, Tony Cazeau, Matt Ulery, Quinlan Kirchner, This Is The Kit, Mathew Tembo, Percy Brady, Tony Allen, Third Coast Percussion, Lorde, and The Buddy Rich Big Band among many others.